A collection of unity packages containing various things I use.

A script to take a bone-chain (transforms with children, with children etc) and make it behave like a rope or string. Has a few potential uses but I tend to just use it for flowing hair or scarves. (worth noting;ribbons have no collision with anything)

Alternate system to PlayerPrefs, saves to local file on certain platforms and defaults to PlayerPrefs on others. You can specify the save location per-platform so people can copy their saves or back them up or whatever.

System that works a bit like PlayerSave, but lets you save to multiple save slots, includes support for autosave. Includes an older version of Sobscure (a script for simple encrypting and obscuring of strings).

System to manage resolution settings with a countdown that reverts to a previous resolution if the new resolution isn't accepted, specify what windowed resolutions you want available as well as whichever fullscreen resolutions unity detects are available.

A script for capturing high quality screenshots and video. Especially useful for recording video at a constant FPS, slowing the recording but making sure the output plays at the specified framerate.Video is output as a series of images, so can be compiled using whatever video (or gif) editing software you use. As a bonus, it can record video across scene changes.

Updated to add support for recording audio too, though it must be done as a separate step because of tweaking game time to record video. It's a little more involved but you can just skip it if you don't need it.

Simple system for multi-language support. Supports alternate localisations for text, images and audio. Includes Demo scene and CSV import/export functionality. The new 2.0 update should run faster, use less memory, and has a much nicer interface :)

System for recording the transforms of an array of game objects at run time, and the system ~tries~ to export it to a collada file. The idea being I can act out things using VR input and use the animation as a guide when animating in blender... it does not work as well as intender (read; "barely works")

A couple of tools for combining input textures to make a new texture. First is "Atlasify" which takes an array of square textures and outputs a texture atlas with padding, Second is "TexCompiler" which lets you build an ARGB texture from several source textures' channels and lets you invert values per-channel (useful if you're squeezing extra data into a single texture for faster shaders). Also includes my SDF generator which can make tiling SDF images.

System for getting TwichChat in unity, can be used by streamers of the game to allow chat to interact with the game, or just to display chat inside the game using the included TwichChatDisplay class.

Input wrapper with a WHOLE bunch of features, check out the main page for it here.

System for rendering 3D with specific (and exact) dithered palettes. Includes scene to generate LUTs (Lookup Tables) for any given colour palette, and a post-processing image effect to put on a camera. I have a video of me demoing and talking through this here.

System for VR games so a first-person monitor/stream view isn't so shaky, relatively basic but removes extreme jittery motion, head roll, and generally smooths things out so it's easier for people not in the headset to watch.

System that I used to show the story for my meditations game "The Hero and The Hound", shows a sequence of 'scenes' which can be animated and appear with various effects, has a prompt to advance, closes when the story is over.

A class for obscuring strings, give it a random seed and it can encrypt and jumble your text, with the same seed it can reverse the process. (Designed to obscure things from players, it is NOT something you should use to encrypt important data!) 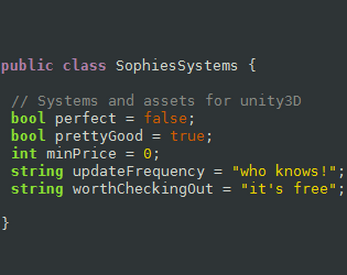